Pepper Steak Casserole is a low carb baked casserole that’s loaded with all the yummy stuff! Tender beef, juicy bell peppers, onions, mushrooms, and of course plenty of cheesy goodness! It is a hearty casserole for any occasion.

I’ve always been a huge sandwich fan, just ask my mom and husband. They used to always hate asking me where I wanted to eat because I would always choose a sandwich shop. Neither one of them are huge fans of sandwiches like I am but because they loved me they would suffer through it.

One of my favorite sandwiches would have to be the Philly Cheesesteak. It’s loaded with tender juicy beef, sliced onions and peppers and then there is the cheese, or the gloriously gooey cheese!

So I did! But since I know how iconic the Philly Cheesesteak is in certain regions of American and since my recipe isn’t as authentic to those classic sandwiches when it comes to some of the ingredients, I went with a different name for this recipe.

But don’t be fooled, even thought I call this my Pepper Steak Casserole, it has all the same tasty flavors of those amazing Cheesesteaks!

It’s all About the Steak!

The key to any good cheesesteak or pepper steak is certainly the steak portion of the recipe. It has to be very thinly sliced hand have great flavor. In most traditional recipes for the sandwich it calls for delicious ribeye steaks since they have the best marbling.

If you are an over achiever foodie, or if you just have some extra time on your hands, you can go a step above and purchase a 8 ounce fresh cut ribeye steak at your local butcher and have them slice it super thin for you.

That would be absolutely amazing in this recipe. Oh boy would it be tasty!

However, I am not an over achiever on most days, so I didn’t have the time to run by the butcher when I wanted to make this recipe a few weeks ago.

So, I turned to a store bought convenience options called Steak-Umms.  This is a brand of thinly sliced steaks that can be found in the freezer section of most grocery stores like WalMart.

Now don’t freak out thinking this is some super processed meat option, because it isn’t that at all. The only ingredient listed on the box is beef. It also states that it has no artificial ingredients or added flavors which is great.

This box of thin steak cost me right at $9 in my local store for this one pound box. If you are like me, that might seem pricey for only a pound of meat, it made me feel better knowing that it does yield enough steak for two of these casseroles.

So that helped me justify the cost since I knew my family would get two dinners and a couple of lunches out of the beef. Which was a win for this momma!

This is just the route I choose to go with my steak because it saved me so much time with the recipe, so choose what is best for you and your schedule when you choose between fresh cut steak or this frozen option.

Assembling this casserole basically just boils down to cooking up your steak and veggies, making the bottom crust, yes a crust, and layering it all in a baking dish!

We’ll get to that part about the crust a little later.  Right now let’s  look at this process a little more closely so I can walk you guys through each step in this recipe. 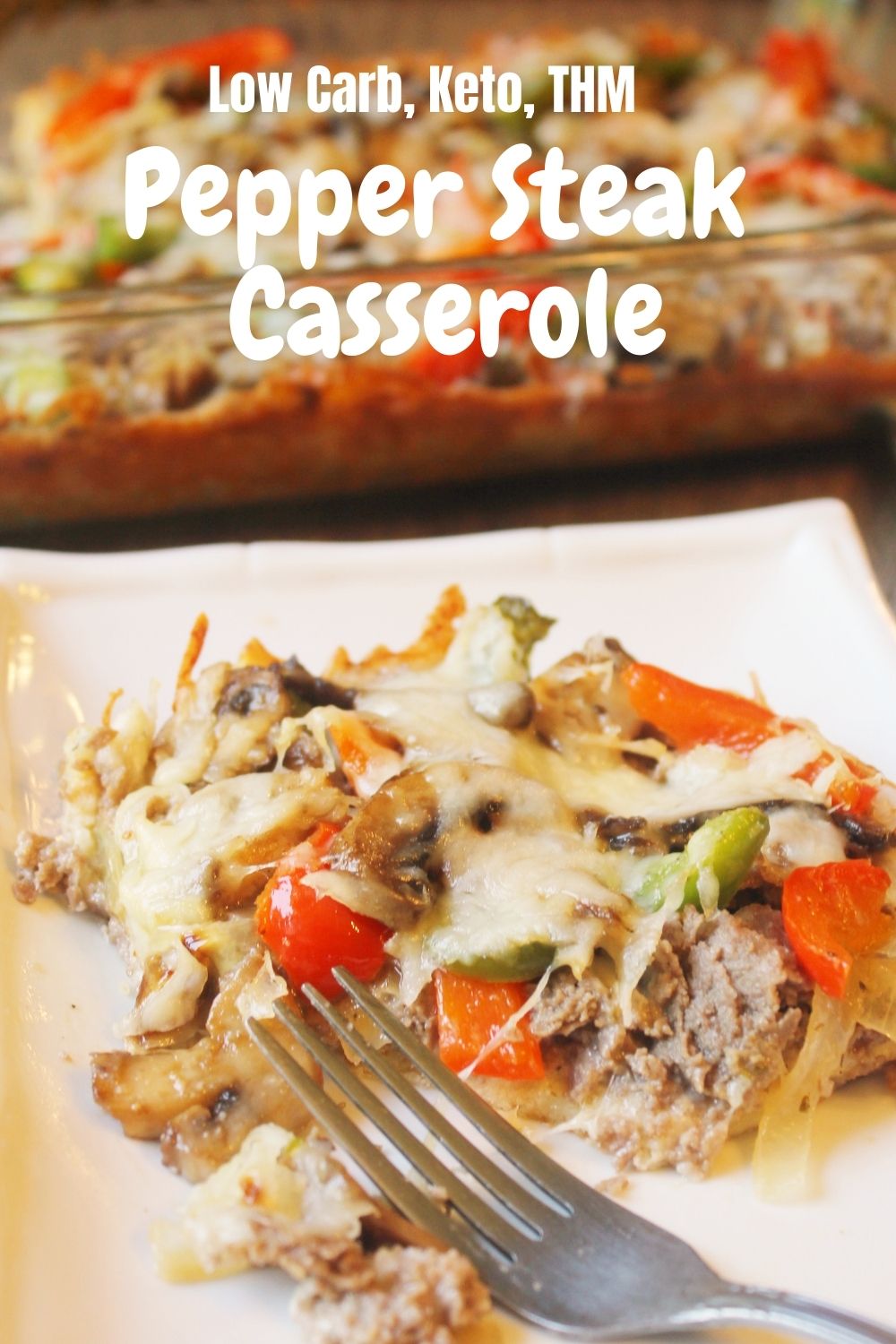 The great thing about steak being so thinly sliced is that it cooks up super fast. I’m taking less than 8 minutes!  Since it cooks so fast keep in mind that you need to watch it closely. You don’t want to over cook it because it will dry out when it cooks again in the oven later.  To prepare your steak, add a little olive oil to a large skillet and in toss in the steak. Season with salt and pepper to taste and cook the steak until there is no pink showing. Remove it from the skillet and let it rest while you work on the peppers, onions, and mushrooms.

What would pepper steak or a cheesesteak be without the onions, and bell peppers? I’ll tell you what it would be, just so plain! To cook the veggies, I used the same skillet that I cooked the steak in to avoid dirtying another pan. Leave some of the oil and steak drippings in the a pan and toss in your sliced onions, and peppers.

Cook them until they are almost tender and only then should you add in the sliced mushrooms and seasonings. The mushrooms will cook much faster than the other veggies, so throwing them in last works best. Cook this mixture until the veggies are all nice and tender, but not mushy.

My Favorite, The Cheese:

So the type of  cheese used on Cheesesteak Sandwiches is one of those things that can be controversial when it comes to certain parts of the United States. Some well know sandwich stands use cheese wiz, while others use processed America Cheese or Provolone.

In my casserole, I stuck to Provolone because it was easily found in stores and it is not as processed as the American Cheese or Cheese Wiz. Which means less added carbs!

I found that I like the shredded Provolone best and I find it in the cheese section of my local grocery store, but if you can’t find shredded Provolone, then you can just layer on some slices instead. Or maybe you prefer the Cheese Wiz, so go for it my friend!

Here’s a little secret, I’ve went a little rogue sometimes in the past and used a homemade Queso cheese dip to top this casserole also.

Gasp! I know such a sacrilege to the hardcore cheesesteak fans, but it was super yummy! So, don’t be afraid to break the mold here and use your favorite cheese on this casserole. I promise I won’t tell if you don’t!

Replacing The Sandwich Bread In The Casserole

Of course we are not having this Pepper Steak on a nice crusty roll like one would with a sandwich, so in order to mimic that I used a low carb crust which is made of the cheese dough known as the Fat Head dough.

I’ve blogged a ton of recipes here using this dough so I’m not going to go into a lot of details on how to make the dough but I’ll link to my video and recipe for the dough I use below in the recipe card.

The dough is prepared then rolled out and placed into a 9×13 glass baking dish and prebaked for 12 minutes. Then I start layering in the toppings starting with cheese, then steak, then veggies, and more cheese to top it off.

Then once all assembled you bake the whole casserole at 350 degrees for 15 to 20 minutes or until warmed through. Remember, most of the ingredients we precooked so we just need a few minutes here to finish cooking the crust, and melt all that yummy cheese onto the steak and peppers.

That basically is it you guys, once baked you are ready to dig in. Our family loves to eat this with a side salad since it is so heavy but you could choose any side dish you wanted.

So until next time friends, I leave you with visions of cheesy goodness and hopes of joy and blessing to you and yours! As always I want to hear from you, so drop me a comment here below or say hello on my social media pages.

Pepper Steak Casserole is a low carb baked casserole  that’s loaded with all the yummy stuff! Tender beef, tend juicy bell peppers, onions, and of course plenty of cheesy goodness! It is a great hearty casserole for any occasion.

I am a southern girl through and through that loves to laugh, cook, read and spend time with family. My passions outside of home schooling my son are ministering to those in need and creating art in the kitchen! Every day is an adventure in our little house and I wouldn’t trade it or the chance to share here with you for anything!

I'm Keri, a Southern Girl, a homeschool mom, and a known coffee addict! I am on a mission to get healthier so I love sharing my journey and recipe with you here on the blog! So grab a cup of coffee or tea and lets chat!

“We are a participant in the Amazon Services LLC Associates Program, an affiliate advertising program designed to provide a means for us to earn fees by linking to Amazon.com and affiliated sites.”