Tender and juicy shredded chicken smothered in a low carb sweet and tangy bbq sauce then baked with a southern style cornbread topping. This casserole is definitely comfort food in a bowl!

This BBQ Chicken Casserole recipe is a mixture of shredded chicken, onions, and peppers that all get tossed in low carb BBQ sauce before being topped with a cornbread like topping and baked.

You guy, this casserole is my idea of a comfort food at its best! A warm filling topped with a buttery and tender cornbread, I mean what’s not to love!

I wish I could take the full creative credit for this yummy recipe, but alas I can’t since I had some inspiration.

It’s actually a modified version of a recipe that had been tormenting me over on my Facebook Page. Now, when I say “tormenting me” maybe I should clarify.

It really doesn’t count as torture when every time I saw it, I had to stop myself from drooling. Yes, it looked that good to me.

Now that I’ve gotten your curiosity up, I’ll let you know that the recipe was actually an Facebook Ad from the Kroger Stores. This is a grocery store chain in our region that I actually shop at regularly (thus the targeted ads I’m sure lol).

If you don’t have a Kroger, you may be familiar with them by other names. I think one well know name they may go by is Smith’s in other regions.

Anyway, the Kroger Ad featured a delicious looking recipe for their BBQ Cornbread Skillet  that was featuring some of their store’s products. Basically it was a yummy BBQ Chicken recipe cooked in a cast iron skillet with a cornbread topping.

I was intrigued right away and clicked on the ad so I could check out the recipe because honestly, they had me at the word cornbread!

As you can imagine the recipe was not low carb or gluten free, but still it looked delicious. The recipe calls for using one of their rotisserie chickens and mixed with their brand of a sweet and tangy BBQ sauce.

Then that mixtures gets topped with one of those boxes of the sweet Jiffy Muffin Mix. A type of sweet cake like cornbread mixture.

Since I’m a Southern girl and grew up eating cornbread I loved this idea of using cornbread as a crust so I knew I had to find a way to convert their idea into some that was lower carb and gluten free.

Not to mention I needed to remove that sugar in cornbread! We all know sugar doesn’t belong in cornbread ya’ll!

Well, at least to me it doesn’t! Tell me in the comments below, do you like your cornbread sweet or savory?

I won’t judge you, well at least not to harshly anyway! Okay, I’m kidding, nothing but love for you all.

One thing I wanted to keep in common with the original recipe is the simplicity of it all. So since I knew I was going to have to adapt the sauce and the cornbread topping to make them low carb friendly, I went ahead and stuck to using a rotisserie chicken for the filling.

However, if you have some shredded chicken in your freezer or if you want to cook up a few chicken breast you can do that as well. The Instant Pot is a great way to have chicken breast cooked and ready to shred quickly.

Let’s talk about the two major changes I had to make to the recipe in order for it to fit our low carb lifestyle: the BBQ sauce and the cornbread topping!

My recipe calls for 1 cup of your favorite low carb and sugar free BBQ for the filling. There are some store bought options for sugar free sauce these days that you can find at many local grocery stores.

Using these convenient options would work perfectly fine if they fit your nutritional needs or your current eating preferences. So check your local store shelves if that option works for your family.

I have used the Sweet Baby Ray’s Sugar Free Sauce a time of two when I needed something fast. But I prefer to mix up a quick BBQ sauce at home most of the time to avoid added ingredients. Here’s a few to try!

So as you can see there are lots of delicious sauce choices you can use in this recipe. Just find the best option for you.

Growing up my mom always made cornbread from scratch and taught me her recipe so I had never had those Jiffy Cornbread Mixes until I was in my early twenties.

I can still remember that day I went to my friends house for dinner and she had made cornbread and chili. I love that combo and had enjoyed it many times growing up.

But I was a bit surprised when I took my first bite or cornbread and found that it tasted more like a cake than cornbread. Hmm, what is this I thought?

Yep, you guessed it, Jiffy Mix!

Don’t get me wrong, it wasn’t unpleasant, just not my idea of cornbread. I never said anything to her because how rude would that be after she had invited me over for dinner? Very Rude!

So it was a no brainer to me on this recipe that I would skip the sugar in the cornbread to lessen the carb count and to fit our preferred taste profile.

I just mixed up a variation of my low carb cornbread that I use a lot and spread it over the top of the BBQ Chicken and it worked perfectly.

If you or your family do prefer a sweetness to your cornbread, please feel free to add a bit of low carb sweetener to the cornbread topping I share in the recipe card or use your own recipe that your family loves. 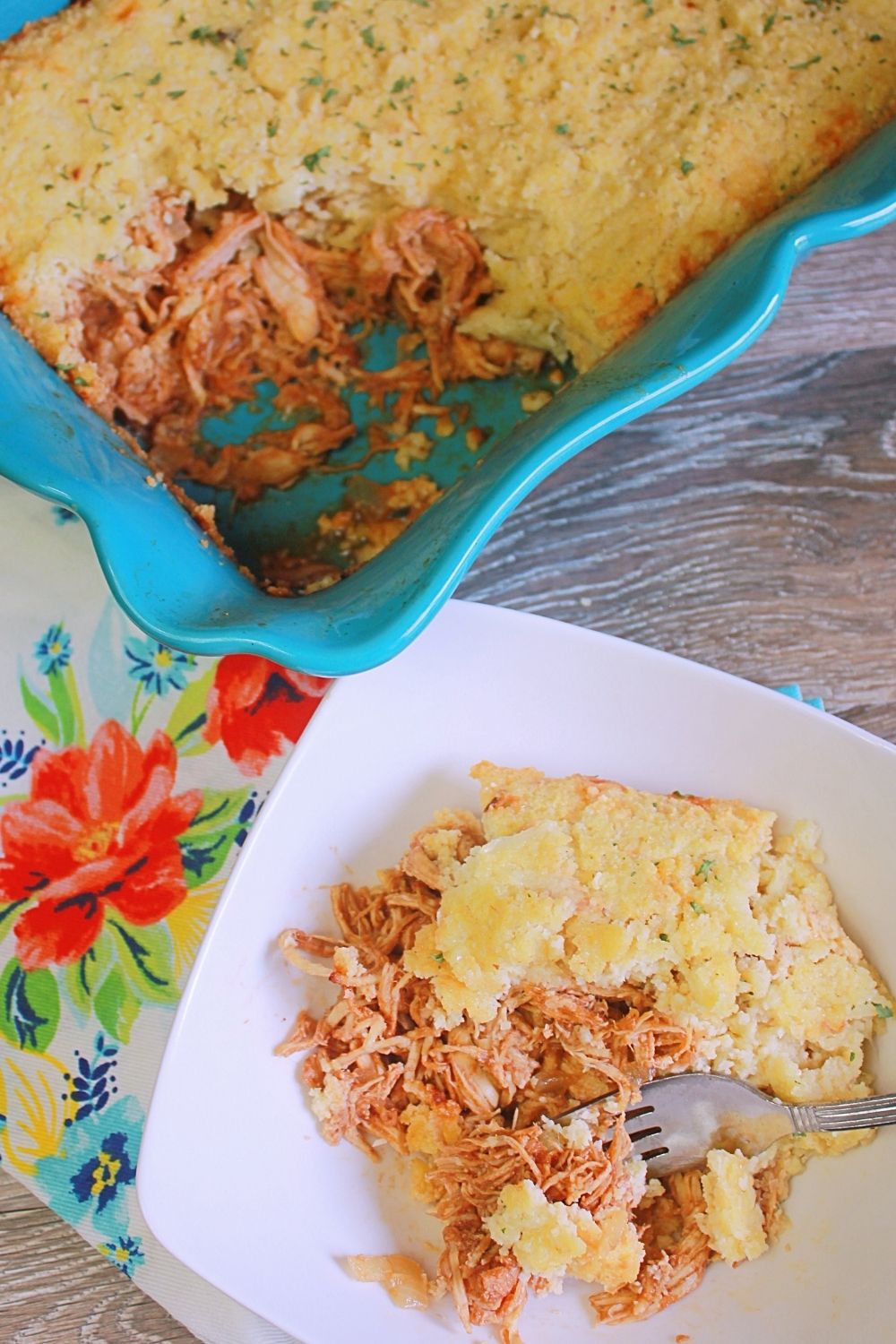 Finishing Up the BBQ Chicken Casserole

Once you have your sauce and cornbread topping ready to go this recipe is a breeze to put together and bakes up in a glorious short 40-45 minutes.

To assemble your casserole place your shredded chicken, onions and peppers, BBQ Sauce, and seasonings in a large bowls and mix well before adding them to a 8×11 baking dish.

Next mix your cornbread up in a separate bowl and dollop it over the top of your chicken mixture. Using a spatula spread the low carb cornbread mixture evenly across the top of the casserole.

Place the baking dish into the oven and bake the casserole until the top is nice and golden brown and a tooth pick comes out clean when inserted into the middle of the cornbread topping.

After you have baked your BBQ Chicken Casserole let it set five minutes before serving to give it time to set up a bit. I love to serve this recipe with Cole Slaw or a nice green salad.

I just think it adds a fresh element to this heavier comfort food. But no matter what you choose to serve it with I am willing to bet that it will be a delicious dish that all will enjoy.

Tender and juicy shredded chicken smothered in a low carb sweet and tangy BBQ sauce then baked with a southern style cornbread topping. This casserole is definitely comfort food in a bowl!

I am a southern girl through and through that loves to laugh, cook, read and spend time with family. My passions outside of home schooling my son are ministering to those in need and creating art in the kitchen! Every day is an adventure in our little house and I wouldn’t trade it or the chance to share here with you for anything!

I'm Keri, a Southern Girl, a homeschool mom, and a known coffee addict! I am on a mission to get healthier so I love sharing my journey and recipe with you here on the blog! So grab a cup of coffee or tea and lets chat!

“We are a participant in the Amazon Services LLC Associates Program, an affiliate advertising program designed to provide a means for us to earn fees by linking to Amazon.com and affiliated sites.”